A brief look at JG Ballard’s dystopian classic and the Brutalist architecture that inspired it.

Spring marks the cinematic outing of JG Ballard’s hitherto ‘unfilmable’ science-fiction novel High-Rise, starring likely James Bond successor, Tom Hiddleston,  as anti-hero Dr Robert Laing. There is some irony in the casting of this central character, as the ‘Hiddleston Hybrid’ straddling the fictional creations of Ian Fleming and JG Ballard is not the only aesthetic link between the two writers. The polarising edifices that inspired the 1975 literary release of High-Rise, in this case Trellick Tower in West London (not far from the Westway which was the setting for Ballard’s controversial and highly unforgettable novel Crash in which descriptions of transgressive sex epitomise the term ‘niche’) and the Balfron Tower in East London, came courtesy of the nascent Brutalist movement dominating 1960s architecture in the UK, and both notably designed by Hungarian architect Ernő Goldfinger; most likely the model for Ballard’s omnipotent High-Rise architect, Royal, and a figure so despised by Fleming that he stole the name for one of his most famous arch-villains. 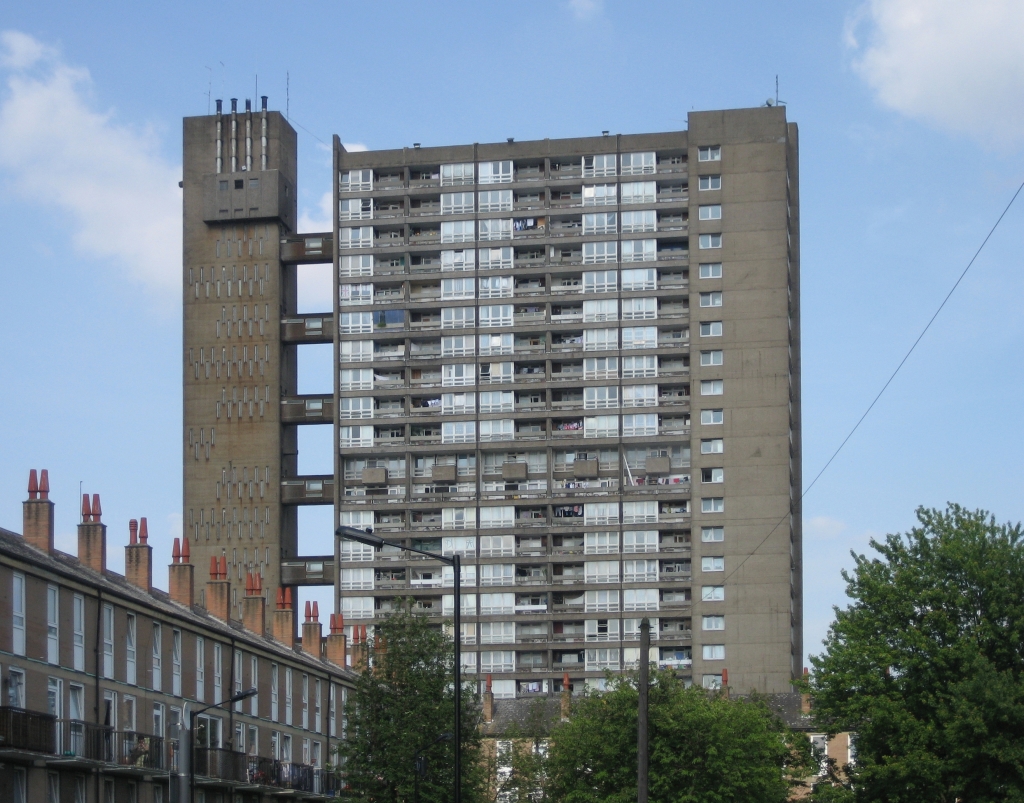 Contrary to myopic belief, Ballard would most likely have relished this irony as he would no doubt have enjoyed the shared psychopathy of both his and Fleming’s central characters. While his deadpan humour did not always translate- indeed the exotic surrealism of his wit was often hidden behind his calm, bland language and stark depictions of dystopian and even apocalyptic landscapes- for me and many other Ballardian cultists, he is a master of humorous social observation. Always inventive and experimental in his dexterous use of different styles and genres, the term ‘Ballardian’ is really best used to honour his typically prescient unveiling of humanity’s propensity for extreme behaviour. Much like the Brutalist movement, Ballard received initial hostility to some works now deemed as classics (an infamous publisher’s reaction to Crash noted, “This author is beyond psychiatric help. Do Not Publish!”) but with the adaptation of High-Rise by popular cult film director, Ben Wheatley, Ballard’s timeless novel seems to be getting the press it has always deserved.

From the moment I read High-Rise as a teenager in France, I was hooked on Ballard’s writing. So rarely had I read a book that took a magnifying glass to various cross- sections of society and satirised them without the weight of a heavy hand. Ballard’s distinctive observational wit sliced open the superficial layers of civilisation to reveal a hidden human menace only liberated by catastrophe- waiting and willing for the man- made artifice of society to break down so it can wield the savage animal within. Another book that struck me at that age was Bret Easton Ellis’s American Psycho which captured the yuppie narcissism of the 1980s. As Ballard’s High-Rise was designed for orgiastic mania within the urban complexes, American Psycho is dominated by glassy skyscrapers, the protagonist Patrick Bateman always surrounded by windows and mirrors in which to self- worship. Both are written with an icy glare for human detail but both eschew the temptation to drive home a weary morality tale. Instead the collective aims of these two novels was to discompose the reader; Bret Easton Ellis by portraying a ruthless, even murderous underworld in shallow New York society and Ballard by suggesting a uncomfortably familiar bloodlust within the aspirational British middle class. Ballard despised the idea of a nanny state and often it seems his novels serve to strip away a false veneer of propriety, stating in an interview “nothing is allowed to distress or unsettle us. The politics of the playgroup rules us all.” 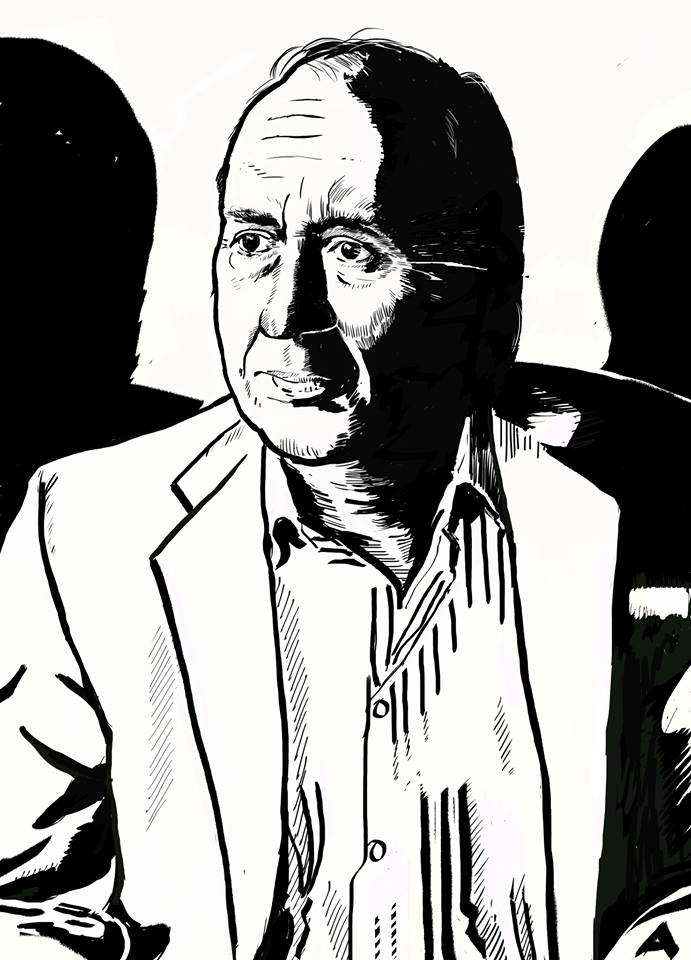 High-Rise is by no means the first film to centre its action around Brutalist architecture. Myriad films have been been inspired by or creatively utilised Brutalist design; from contemporary films  such as A Clockwork Orange (filmed on the Thamesmead estate) and Get Carter to the surrealist dystopias of Brazil and Blade Runner. Although disparate in their stories, all these films are linked by the emphasis on human relationships and the social prisons they are trapped in while paradoxically offering up the cinematic escapism we often crave. The buildings seem to resonate with their situation, highlighting a truth that  it is society and not the buildings that are imprisoning them. As Ballard pointed out; “It’s very difficult to find the “real” as the environment is totally manufactured.”

The social-surrealist prisons that dominate many of Ballard’s work are perhaps not surprising. Born in Shanghai to British parents, he and his family were interned for two years by the Japanese during World War II before he was repatriated to the UK. The most obvious example of the experience is the fictional retelling in celebrated novel Empire of the Sun; his most commercially popular work that was later adapted into an award- winning film by Stephen Spielberg. Ballard, with his ever-humorous mind, transcended the themes of his childhood with a captivating play on social confinement. The inhabitants of High-Rise, a luxury tower block in which they live accordingly to class, choose to be isolated and eventually dismantle themselves, analogous to the famous violent, hyper-sexual and depraved results of ethologist John B. Calhoun’s contemporary experiment, the “behavioural sink” or “rat utopia.”

There are a number of parallels between JG Ballard’s novels and the architecture that inspired them, one most recently raised by journalist Jonathan Meades, who traced early inspiration for the Brutalist buildings to prison-like Nazi bunkers on the Channel Islands. Brutalism in London, much like the renewed interest in Ballard after the film release, is having its own mini-Renaissance. The origins of the rugged raw designs were steeped in egalitarian principles and predominantly idealised for use in easing urban overcrowding. Brutalist buildings sprung up around Europe, primarily in the guises of socially progressive government projects, shopping centres and high-rise housing; but the seemingly oppressive unfamiliarity of the new builds meant the majority of the buildings perplexed and horrified many. Of late there seems to be a celebratory attitude towards these once beleaguered structures, some innovative and some, rather predictably, purely entrepreneurial. The cultural behemoth that runs along the South Bank from the National Theatre to the Royal Festival Hall is habitually and creatively used to great communal effect. The Barbican Centre voted “Ugliest Building in London” by a dull 2003 poll  has recently rocketed in popularity. The aforementioned Balfron Tower has benefitted from a £40 million investment turning it into luxury flats. The last few times I have been to Notting Hill Carnival, some of the trendiest after- parties have been at Trellick Tower and throughout the capital, hip bars and street food joints are popping up in unlikely concrete playgrounds, selling Aperol spritzes and sourdough pizzas on the top of car parks and under train-lines.

There seems to me to a deliciously Ballardian irony that London, increasingly described as “a playground for the rich”, is appropriating these buildings, in a way mimicking the eclectic, evocative manner in which East Berlin has rebuilt itself, albeit with an unmistakably tame, gentrified feel. At times it seems the city is in danger of becoming culturally hollow as many young people are finding themselves priced out while council housing is being sold off and inhabitants forced to move to the outskirts or other cities altogether to make way for wealthy buyers. Watching High-Rise on screen, complete with its original ‘futuristic’ 70s setting, I can’t help but feel that JG Ballard, a self-styled “man of complete and serene ordinariness,” could foresee forty years ago great ironies and contradictions within our society, his warning cry, “the whole planet is turning into Switzerland”at times seeming terrifyingly apt.

JG Ballard was a gifted satirist with his finger on the pulse of what makes that dark twisted human heart beat. His provocative themes and ultra-modern concerns such as climate change and social dysfunction, while often warped and pestled into the pages, gave him a reputation for being avant-garde. His visionary, imaginative take on the austere utilitarian edifices springing up around him went against the grain but, typically humble, Ballard, who died in 2009, denunciated himself as a seer; “I think I’m being left behind, you know. I’m not sure I’m a good guide anymore but I’ll do my best.” At times the current climate in London seems to be in danger of his most telling premise “I could sum up the future in one word, and that word is boring.” If that is the case and the future really is boring, I suggest taking an afternoon to sit on top of the National Theatre with a copy of High-Rise and escape to where the past was not.