On a cold and wet Sunday evening on the most romantic day of the year, thousands of people chose to be spellbound by the smooth, sultry and scintillating sounds of Massive Attack live at Geox Arena in Padova rather than a romantic meal in a restaurant over trickly candlelight. The impressive concert hall was well on the way to full by the time we rushed in to see the award winning Scottish hip-hop/tribal act Young Fathers open. Visceral, snarling, pounding drums to a sensory explosion, the three men were an excellent starter to proceedings, a valentines day massacre of a performance, showcasing early anthems including ” I Heard “, “Get Up” alongside new material from sophomore release “White Men are Black Men Too” they eschewed a sonic cacophony of anger, a la Death Grips boiling over and spilling out onto a streetfight with Public Enemy. It was easy to see why messers Massive Attack recently labelled them “The best fucking band in the World”. 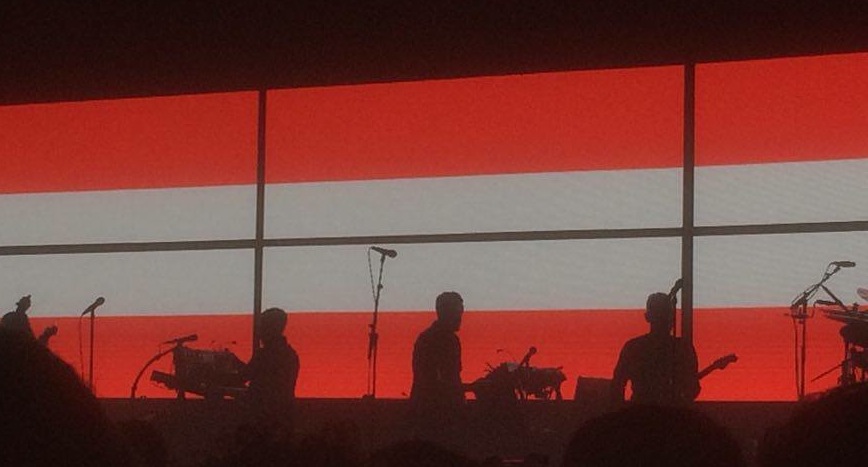 A massive screen bellowed a lonely figure in luminous white, eyes covered, head wrapped in a turban, a provocative political entrée of what was to come. Onto the headline performance as we were thrown into opening number “Battle Box 001” with Martina Topley Bird singing in front of a myriad of explosive corporate imagery,  blazing and burning the eyes in an effescent red. 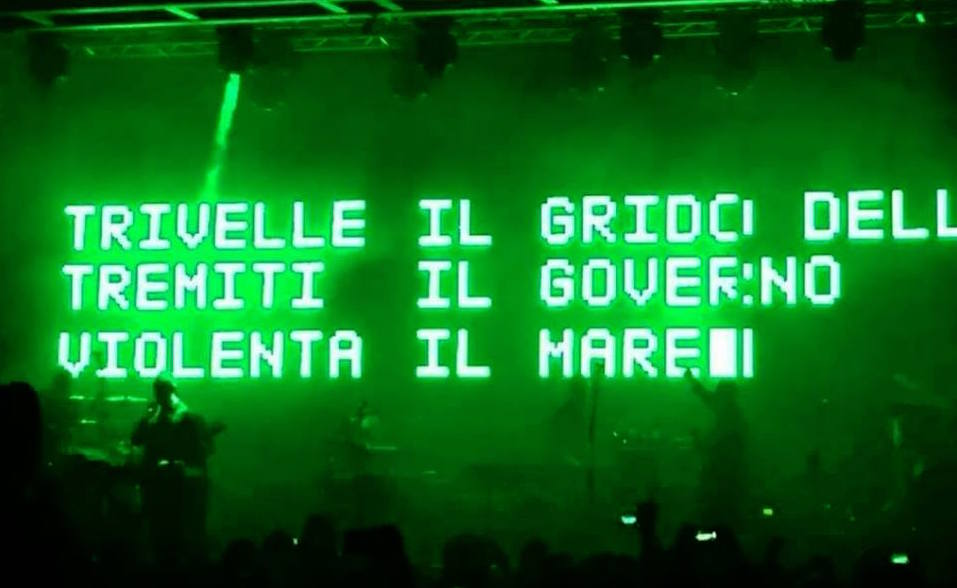 Massive Attack and their two endearing frontmen Big Daddy G and Robert Del Naja, oozed confidence and meandered through the impressive cast of 2 drummers, keyboard players, singers…you name it they had the full artillery on show. The two  frontmen acting more like comperes, their voices holding a mysterious pain, showcasing the wealth of material over their incredible 20 years history. New songs mixed flawlessly with the old, with recently released ‘Ritual Spirit’ EP sounding incredible live and staking a claim that they are indeed back to winning ways. “Paradise Circus” ebbed and flowed, Martina Topley Bird ever present, Horace Andy came out for “Girl I Love You” and the utterly sensational “Angel”, alongside massive anthems “Teardrop” and “Karma Coma”. A sensory and sonic kaleidoscope of political imagery and messages beamed throughout, with particular attention to detail as to appeal to the local crowd and the italian political situation, the doomsday scribings only serving to accentuate the powerfulness of the music. Finishing with not one, but two encores, proceeding furthermore to showcase the talent of opening act Young Fathers who came back onstage to provide us with more songs, including the fantastic MA/YF collaboration “Voodoo in my blood”. We were sent home with an operatic show stealing virtuoso performance of “Unfinished Symphony” accompanied by the wonderful voice of Deborah Miller.
A Masterclass.
bandbid daddy gBristolelectronic musicgeox arenaliveMASSIVE ATTACKRobert Del Najashowtrip-hopYoung Fathers
- commenti
Di Mike Lamborghini Williams