On Tuesday 23rd Brits will vote to decide whether to leave the European Union.

Take me back to beautiful England…”

So sings PJ Harvey in “The Last Living Rose”, her melancholy love-song in her 2011 Mercury Prize winning album Let England Shake. The song, a keening yet caustic cry of nostalgia, seems poignant in this period of political uncertainty over Britain’s position in the EU.  While Polly Jean fondly depicts the “grey, damp filthiness of ages, fog rolling down behind the mountains and on the graveyards of dead sea-captains”  she also decries the recklessness of the country in its dubious allegiances and allies, dangerously prone to irreparably bad decisions like our “gold, hastily sold for nothing,” and misplaced martial propensity for bad wars. I’ve been listening to the album a lot over the last few months as my homeland gears up for the EU referendum and in doing so have stirred up some surprising emotions about Britain as a European country. Understandably there may be a serious feeling of apathy when reading another article about Brexit but humour me long enough to argue there is one case left unsaid. This is the Eurotrash guide to Brexit and the sleazy sentiments behind leaving our big messy European family.

When I speak of Eurotrash, I can’t help thinking of a time when, before we could choose what we wanted to watch digitally, there was a certain uniformity in telly viewing. Take the 1990s Channel 4 TV show Eurotrash, that accompanied Chris Evans in TFI Friday (now appropriately back on screens in lieu of the televisual haemorrhoid that was Jeremy Clarkson).  The presenters Jean Paul Gaultier, Antoine de Caunes and the immeasurably buxom Lolo Ferrari teased out our cultural differences in a gently loving form of xenophobic stereotypes and hilarious foreign finger pointing (think the Eurovision Song Contest, but funny). Complete with nonsensical regional dubbing and obscure interviews by celebrated topless models such as Carla Bruni and Melinda Messenger, it was anarchic, garish and downright rude while maintaining a certain inclusive, egalitarian attitude to cultural silliness. That trashiness spoke volumes to me about our relations with our European neighbours but it seems that others have recognised their crude cultural relevance as Eurotrash is back on Channel 4 for one night on the eve of the referendum to remind us uptight Brits of the “many, varied and occasionally alarming cultural delights enjoyed by our European cousins”.

Perhaps, being half French/half British I am somewhat biased as those European cousins really do exist. Like many others who have indulged in the somewhat pointless yet mildly exciting bureaucracy of owning two passports, I also know the inner conflict in my dual identity heart and the difficulty of having a surname often lost in translation (“its a SILENT ‘t!’). After a childhood spent feeling like a star-crossed love child, witness to the violent family disputes over mad cow disease and the confusing summers spent shifting allegiance between the tangy taste of McVities Jaffa Cakes and the sharp chocolate crunch of Petit Ecolier, I briefly learnt as a teenager to capitalise on the supposed sultry French side (before Ricky Gervais shut me up with his quip: “I’m half French half English and I’ve got qualities of both, so I am crap in bed but at least I’ve got bad breath”). Despite these occasional tempests of merging two cultures I have also witnessed first hand something pleasing in the pedestrian aspects. The first time I introduced my rapt French grandparents who were not privy to the daily repeats of Midsomer Murders on ITV to Inspecteur Barnaby is one, and, on the other side of the pond, confidently making my English school friends a true pain au chocolat (a baguette with a bar of Lindt inside) is another. 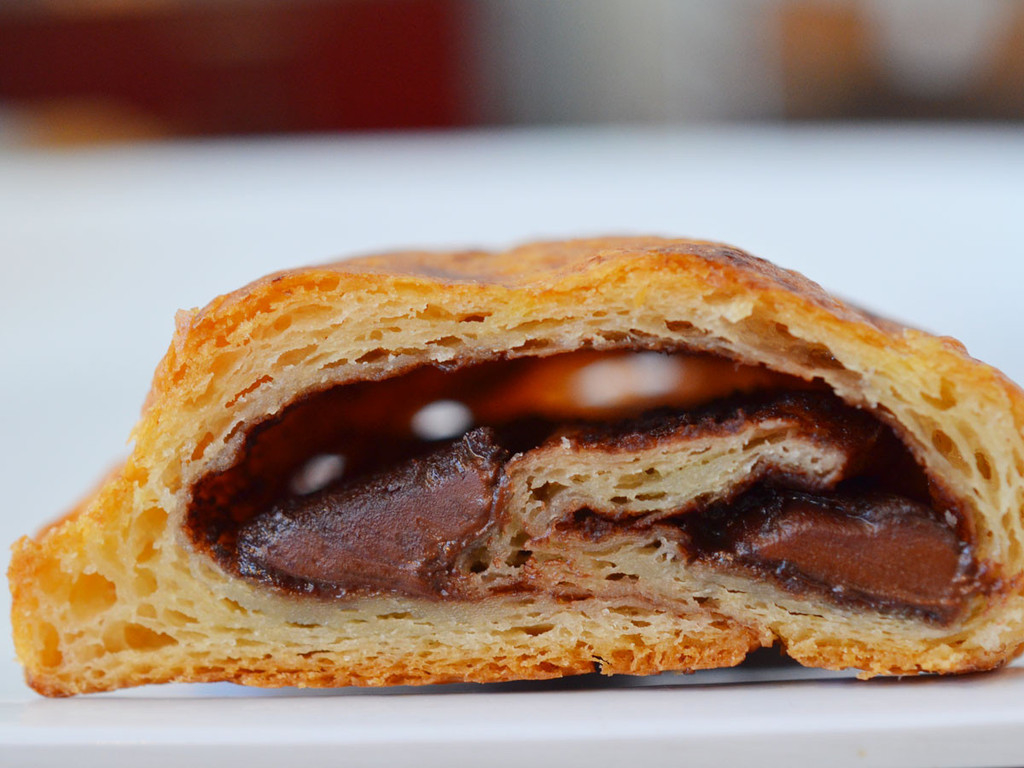 We know you now want one

It doesn’t have to be those with mixed nationalities that can be part of this club for our role in the EU includes us all in an exotic, kickass, compassionate superpower and thus party to all that these many countries can culturally offer. Those who are truly Eurotrash don’t support Brexit. We recognise and celebrate the true nuances of being European. We knew who Vanessa Paradis was long before Johnny Depp did. We can passionately attempt the Youssou N’Dour part of his duet with Neneh Cherry in “7 seconds”, a song still religiously played on French MTV. We understand the years when a universal appreciation of Red Hot Chilli Peppers, MC Solaar and Paolo Conte could atone for bad accents. In Italy where I currently live, a reverence for ageing British rock bands still goes a very long way. Embracing Eurotrash is not the same as carefully cultivated appreciation for, say, Twin Peaks and Mazzy Star. Being Eurotrash is more akin to rabidly watching re-runs of Quantum Leap and still owning the albums of Robson and Jerome. It’s an unglamorous, affectionate, startling road trip of ethnic discovery. There’s an argument that social media has taught us how to filter our lives and in the process we have lost the freedom to be trashier. The potential loss of our place on the EU seems to me to further threaten these brilliantly strange quirks and tastes.

The European Union, as an antidotal hybrid of diplomatic powers against extreme nationalism was formed like a blood-stained poppy out of the mud from World War I and II. It was a time of great social change throughout the continent, not just in the UK with the formation of the Welfare State and the NHS (both institutions at present struggling under the blue fist of the current UK government). Every war leaves a stain of disunity and the foundations of the EU sought to connect the reeling countries, still recovering financially, socially and emotionally from war. In this respect, Brexit has this strange poignancy in timing. The debate over whether to leave the EU comes at a time when we are slowly losing the last generation to have suffered first hand from the atrocities of WWII. I have recently lost grandparents on both sides of my family, veterans of occupation and evacuation who had revelled in revealing the ripe scandals of the past and, while perhaps naive, a political departure from the great infrastructure of positive change from that war seem to make me feel the loss even more. The current refugee crisis has thrown into critical debate our ability to cross borders, the way we welcome or turn away those leaving their homelands. It makes me think of the trapped butterflies in Casablanca desperately selling off their jewels to make passage to safety except there seems to be little safety in our rich, paranoid, post-colonial country. The EU is not perfect and while the war is receding into second hand accounts we must think afresh about our current situation, but with respect and an informed attempt at foresight for our uncertain future. As Elena Ferrante recently pointed out in her argument against leaving the EU, “We don’t need roots now: they make plants of us, splendid, yes, but bound to the ground , and nowadays everything is more mobile than ever, shifting quickly from one shape to the next. A broad, true identity must open itself up to all identities and absorb the best in them”.

Being European is a mood that helps us better understand ourselves. We’ll always be British and will undoubtedly still rest on our laurels that came from being a wealthy, tyrannical and pioneering country. We can still hold claim to Shakespeare, David Bowie, Sean Connery, the Spice Girls and, of course, our beloved currency but we can’t deny that being a member of this epic and often flawed continent of powers can only make us more diverse, more cultured and more humble. Our strange queendom, marooned on a cloudy island and plague to hormonal weather really needs all the help we can get. We profit from liaisons dangereuses with our French friends. Bluestockings still flock to Italy for prosecco and a heartbreakingly horizontal Latin education while fossilised academics appropriate the brilliant beaches and bleached marbles from the Greeks. Riotous stags race to Prague and Amsterdam while young artists, priced out of the capital, bask in the brilliance of being able to afford a studio in Berlin. An inter-rail trip can approvingly sing or damn the praises of a country, not over its politics or glorious history, but over the price of a pint. When I hear other expats concerned over the narrowing opportunities to emigrate I picture our eponymous London cockney, Ray Winstone as Gal Dove in Sexy Beast, blissing, blistering and “positively roasting” in the sun of the Costa Del Sol. If, disheartened and weary all of the weighty arguments involved with the referendum on the 23rd, I implore all those eligibly Eurotrash to vote, can we really deny him that?