So, have you heard of OM yet? Orgasmic meditation, or OM, is a practice sweeping North America and parts of the UK in which a partner strokes a woman’s clitoris for exactly fifteen minutes, the goal being relaxation and connection, the focus being on the point of connection between the tip of the finger and the clitoris. The partner, usually male, remains fully clothed, while the woman removes her clothing only from the waist down. The partner then sets up for her a “nest” of pillows where she lays back, and has her clitoris stroked for fifteen minutes while the partner narrates exactly what he is doing as he does it. Gloves are used, lube is used, a timer is used. At the end, the two sit together and share “frames”, moments from their OM that stood out to them in a special way…

If this sounds a tad strange and cult-esque to you, well, yes, I’m with you there. If I told you that this practice is done at convention centers in front of other people, and that the partner (or “stroker”) may be a perfect stranger, well, your “cult” impression may be amplified. My first thoughts were, this is so weird…it seems kind of creepy or perverted…who goes for this stuff?? However, upon further research, I was able to see OMing in a different light. According to OneTaste founder Nicole Daedone, the goal is to link consciousness and orgasm. It’s about mindfulness, and is meant to “increase overall vitality and energy”, according to the OneTaste website. The practice reframes the concept of orgasm as something beyond a mere goal-oriented, physical sensation. The aim is to be therapeutic, not sexual. The target audience seems to be tired women, who maybe work too much and are craving something more; wanting to regain a connection with themselves and with a partner. Women have described an awakening after experiencing OM. It’s enlightening, liberating, freeing and… 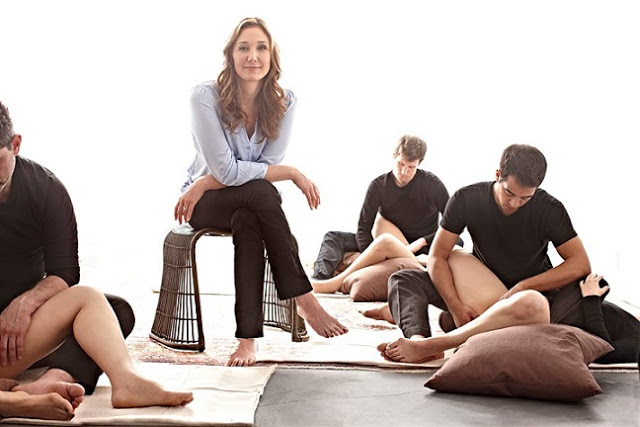 Justine Dawson founder of One Taste

So, why does a part of me still have a problem with this practice? A practice aimed at reframing the idea of orgasm, removing the dirty, sexual taboo and aligning it with practices such as yoga, mindfulness or meditation? Feminists are praising OM as a practice celebrating orgasm in a setting that is separate from sex, and that is liberating for women. Women. Ah. So here is my issue: this practice seems to be decidedly one-sided. OneTaste refers to orgasm as if it is a phenomenon only experienced and needed by women; something that women need to work on, revisit…but what about the men?

In this context, the practice of a man, fully clothed, stroking a female’s clitoris in a controlled and timed setting with no reciprocity is labeled as “liberating” and is called “meditation”…but I can’t help but wonder what it would be called if the tables were turned. If there were a practice in which a woman pleasured a man in a controlled setting, with no reciprocity (and which costs money, to boot!)… would we perhaps label the practice as sexist? If men attended conventions where female “strokers” would sexually pleasure them while they laid still and enjoyed the relaxation of it all, would there be a problem? Would the practice still be celebrated, or would it be condemned? Would we call it meditation, or something else? There seems to be potential for a slight double standard at play here.

According to OneTaste, “Orgasmic Meditation (OM) ushers Orgasm out of the dark, from the shameful and often consumptive places where it used to be, and into the light.” I strongly feel that for men, there is just as much shame regarding orgasm as for women. With all the stereotypes and media portrayals of men being sex driven beings, with their brains in their pants, should men not also have the opportunity to experience orgasm in a safe, relaxed, judgment-free environment? Where that stereotype is broken down? An environment where they can learn to experience orgasm in an alternate way, and explore the concept of the big ‘O’ beyond a mere physical sensation, the be all and end all goal of sex?

I fully agree that the concept of sex and orgasm needs to be revisited and remodeled. Sex should be beyond a mere primal, physical act and can and should be viewed as a mindful union between body, core, and another human being. But, I believe that in terms of OM, there is a huge lack in that there is no equal and opposite practice for men. OneTaste states that with OM, women learn to let go and receive, while men learn to give and let go of the “goal.” They’re on the right track with their philosophy, but in order to avoid being sexist, need to extend the practice to allow both men and women to reframe their thoughts about both giving and receiving. Women, too, experience the anxiety of “the goal” when in bed with a man in the sense that they feel they need to get him there, that this is what intimacy is. Women should have the same opportunity to let go of this goal that men do during OM, and men should have the same opportunity that women have to let go and receive during OM.

I do believe that OM benefits both men and women, in different ways. Even though he is focusing solely on her pleasure, her meditation and extended state of ecstasy, men are experiencing a certain gratification at being able to facilitate this type of energy, and feeling the connection offered by this type of exchange. It is a wonderful notion to bring orgasm out of the dark taboo place it has been hiding, and harness that energy and sensation for relaxation, meditation, mindfulness and vitality. But, I also believe that both men and women deserve to feel both sides of this practice, to feel the benefits of both giving and receiving. After all, isn’t that what sex is all about?

Born in 1992 in Ontario, Canada. Studied English Literature at Trent University, a small liberal arts university, during which time she explored her passion for literature and writing. Since graduation, she has been travelling, working as a freelance editor and enjoying life in the meantime. Currently based in Florence, Italy. Loves to dance.